In 1776, the Continental Congress, meeting in Philadelphia and having reached their historic decision to dissolve the union between the thirteen colonies in America and Mother England, proclaimed the “Declaration of Independence” as the instrument to announce their intention. Lacking access to e-mail, the task of spreading this news among the colonies fell to horse and rider in the inland areas and boats along the coast. Along the watery coast of North Carolina where roads were almost nonexistent, the delivery of the Declaration had to be by small boats. The town of Beaufort received the news by way of a fishing boat from the Island of Ocracoke further north on the outer banks. The news thus traveled much like a chain reaction throughout the colonies. There were no polls to describe and analyze the reaction of the citizenry to the proposed change in allegiance, but today we celebrate the 4th of July, 1776, as the point of conception of our great nation.

Several years ago, some local salts gathered at the North Carolina Maritime Museum and decided to celebrate this event by having a race to commemorate the delivery of the Declaration to Beaufort. Originally, the Declaration was carried by small boat from Ocracoke to Beaufort through Pamlico and Core Sounds. The logistics of starting a race from Ocracoke, especially on a holiday when the ferries would be jammed, ruled this out. Oriental on the Neuse River was chosen as the starting point with the course running northeast into the Pamlico Sound, then southeast around Cedar Island toward Portsmouth Island, then southwest through Core Sound, turning west at Harker’s Island and thus on to Beaufort. The straight line distance is about 65 miles and there is an overnight stop in Lewis Creek near Lola in north Core Sound. Boats are provisioned for overnight camping and food (no motels in Lola). Participation is limited to open sailboats of traditional design less than 26 feet in length. Construction and materials are optional. Previous participants have been spritsail skiffs, sharpies, Sea Pearls, cat ketch skiffs and misc. All boats must be able to navigate shallow water since the Sounds can be verrrry thin. The only handicaps are the ones brought on board by the participants. For safety and to preserve the nature of this event, racing boats are discouraged and both the number of boats and eligibility of specific boats is at the discretion of the event organizers. Compasses and charts are required and VHF radios are encouraged and other electronic aids to navigation are allowed. There is usually enough wind to satisfy the most hardy salts and all skippers should be experienced in small boat piloting. The water is big and the land is low so it is quite possible to get lost. Chase boats patrol the fleet although boats are often out of sight.

On the morning of July 3rd, the fleet of eight boats (several regulars had other commitments) gathered in Green’s Creek at Oriental. After briefing by the Race Committee, the fleet made their official start by passing under the bridge at 09:30. With a southwest wind of about 6-8kts the boats sailed off on their chosen downwind courses for the mouth of the Neuse River. With the width of the Neuse varying from three to five miles, boats can quickly loose sight of each other. About noon and 12nm later the leaders rounded Point of Marsh on Piney Island and ran on into Pamlico Sound. Whitecaps in West Bay announced the arrival of the sea breeze and all boats enjoyed the 15-20kt reaching wind for many miles along the shore of Cedar Island. Vacationers on the Cedar Island to Okracoke ferry must have wondered what those “damme fooles” in those itty bitty boats were up to. Upon reaching Camp Point at the eastern end of Cedar Island, the sailors faced several new challenges: the shallow water of Core Sound, fish traps and an upwind course to the overnight stop at Lola. In the north end of Core Sound, acres of fish traps appear to allow no clear passage. If nets are not in evidence on the traps, many boats will simply sail between the stakes and others will attempt to find a path around them. Neither course looks like a safe option for the chase boats and we seek out the main channel a couple of miles farther out while local fishing skiffs tear along at full speed through the stakes and other areas which appear impassable on the charts. Just around Camp Point is Chain Shot Island, which is required to be left to starboard since wheels are likely to be needed on its other side. The name of the island is a bit of mystery since any ship large enough to actually have cannon that could fire chain shot would have too deep a draft to get anywhere near it. Maybe the sound was deeper in pirate days. The Core Sound 20, the latest cat ketch skiff designed and sailed by Graham Byrnes, rounded the spit and slipped into Lewis creek at 3:55. The last boat to arrive, the Rocheford, a gunter rigged English sloop built by the late Jeff Scofield when he was master boatbuilder at the Maritime Museum, ran aground, got in a very narrow channel and showed up at 7:30. (below) Sunrise at Lewis Creek 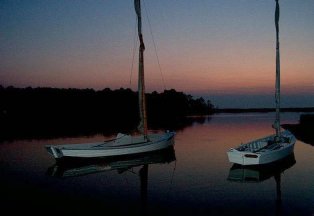 All crews pitched tents on the beach, cooked dinner, told embellished tales of their adventures and bedded down for well earned rest. Since one of the chase boats had too much draft for the tight opening into Lewis Creek, we opted to anchor in Thoroughfare Bay for the night, a decision later regretted when the mosquitoes from the windward shore detected our presence. The guys on boats without screens gained a new respect for their dive bombing tactics. A word about mosquitoes: it has been reported by some that they have been mistaken for Harrier jets from Cherry Point Marine Air Station. Even though their wing patterns are somewhat similar, this would be a gross error as their tail assemblies are entirely different.

In an attempt to make the most of the lighter morning breezes before the sea breeze sets in, the fleet got underway from Lola at 07:00. Faced with a beat of at least 20nm, it is a wise decision. The fleet begins to separate into two groups with the Rocheford, Core Sound 20, a Sea Pearl sailed by Ron Kilburn and a Core Sound 17 sailed by Gordy Hill leading the way. The remote fishing villages on the west side of the sound slowly come into view and pass behind. Atlantic and then Sea Level, where there is a beautiful retirement home for merchant mariners and Davis all drop behind us as small ferries ply between the mainland and the banks taking surf fishermen to and from the beaches and fish camps. This is a one of my favorite parts of the North Carolina coast, with many fewer fish traps than further north in the sound. Larger boats, if they venture in at all, must stick to the marked channels and traffic is always light. There are a number of close by villages where the small boat can be sheltered or the trip cut short if the weather turns nasty. Eventually, when the wind picks up to the anticipated 15-20kts, Graham again stretches the lead in the Core Sound 20. He elects to go around Harker’s Island instead of through the slot between the Island and Marshallberg which would save about 1 ½ miles but require unshipping the masts to get under a bridge. Since the 20 has all rigging and sail controls led aft this would add complications and besides, he has an insurmountable lead unless the boat sinks. Much of this final leg past Harker’s is a speedy reach except for the last part through a cut between Carrot Island and Beaufort which is named Taylor’s Creek but called by other names by sailors. It seems to be a law of nature that no matter which way you want to pass through the creek, it will be upwind and against the current. On July 4th,or most summer week ends, there will also be lots of boat traffic to contend with, although most will give sailors room to maneuver. Since the wind is always very shifty in this narrow and sheltered passage, motorboaters must think the sailors are trying to be difficult as they twist this way and that trying to accommodate the wind direction. Finally, there are dozens of anchored and moored sailboats on the seaward side of the channel but these can be a blessing since the motor traffic avoids them and our sailors can use them to make the passage easier. Eventually, the Watercraft Center of the NC Maritime Museum hoves into view and tired sailors can tie up and step ashore. The owner of the boat that I am using for the Race Committee has to get home for an anniversary dinner so we must gas up and run up the inland waterway to Oriental before all of the boats are in to the Museum. That’s OK, since I will see them at a future get together of the Traditional Small Craft Association and we can rehash the race then.

The Great July 4th Race can test the mettle of even hardy sailors and just to finish is an accomplishment that all can take pride in. Only one boat did not sail the whole course this year although another elected to stop for a rest on the long beat through Core Sound and finished on Monday. Having listened to many one design racers complain about a one mile beat to windward, we must admire the tenacity of all these sailors as most are well past the age of innocence. We may seek to expand the number of boats in the race slightly next year although the number and types of boats participating will continue to be controlled to keep the race safe and adhere to its original character and purpose.

Tom Lathrop can be reached at harbinger@cconnect.net