B&B has a long and highly regarded history with the Watertribe and the success of our designs is due in no small part to the extreme conditions we have put our boats through in competition. "Breaking is not fast", is the mantra of a small boat designer who has their sights set on a watertribe event where over half the entrants do not complete the course. These events include a series of small boat expedition style near shore race courses and was founded by Steve Isaac (aka Chief). The most well known is the Everglades Challenge, a 300 mile unsupported race along the west coat of Florida from Tampa Bay to Key Largo. While the event was originally developed primarily for kayak and sailing canoe trippers it was open to any small boat that could launch from the high tide line with a maximum crew of 2 and nothing but wind or paddle for power.

Graham (aka Roo) was one of the first Class 4 entrants (monohull sailboats) in the race and pushed the class into the next level of competition. Graham won the event 4 years in a row between '06 and '09 twice as the overall winner in his Cat Ketch designs. To see an accounting of (almost) all the B&B designs that have entered the Everglades Challenge since 2006 click here.

After the 2006 event, Graham designed the EC-22 and built it for the 2007 event which he again won with a time of 2 Days, 8 Hours, 56 Min. Southern Skimmer's record finish stood for the next 5 years. You can read more about what influenced Graham's design philosophy in this 2016 article written for Small Craft Advisor as a rebuttal to an article praising the seakeeping qualities of double ended hull forms. As is apparent below the EC-22 is very much the opposite. Graham and Randy (aka Tinker) launch 'Southern Skimmer' in the 2007 EC.

Alongside Graham in 2007, Alan was also participating in his first EC with 3 college friends who had built a pair of Wa'apa trimarans. See their launch here. More here. They finished as a two boat team in first place Class 5. It was in Key Largo after the race that Graham took Alan and his father Paul out on Skimmer and not long after they picked up their plans and plywood at the B&B workshop to begin building a Core Sound 20. Below, Graham, Matt Layden, Alan and Paul (behind the camera) take Skimmer out in Buttonwood Sound. Below Right, Graham and Alan study the EC-22 during a visit to the B&B workshop in 2007.

Paul and Alan's boat 'Dawn Patrol' went on to complete the EC multiple times and finally took Graham's EC record in 2013. As the designer of both boats, Graham noted at the time, "Even if I lose I win." The success of Southern Skimmer and Dawn Patrol led to the development of the Core sound 17 and 20 Mark 3.

Below, Alan and Paul complete their fifth EC in 2018 with a personal best finish time of just 1 Days, 23 Hours, and 57 Min. This was 5 minutes faster than their 2013 record. First place this year went to the very impressive performance by Jeff Linton and Jahn Tihansky in their Tampa Bay 22, an O H Rogers Design with far more sail area, water ballast and hiking racks. 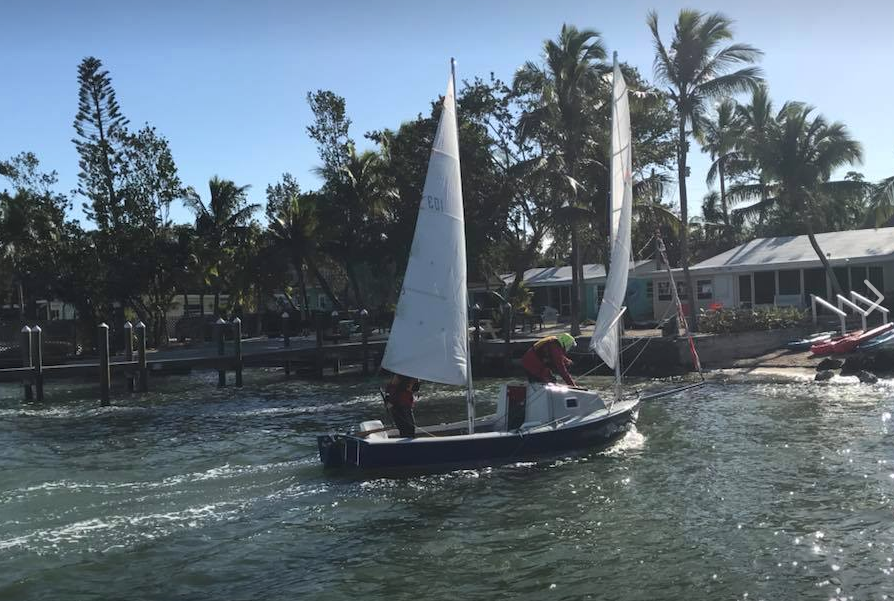 In 2016 Graham reprised his performance in his then new Core Sound 17 Mark 3 'Carlita' sill in her primer and was the first place solo finisher in Class 4. You can read his trip report here. 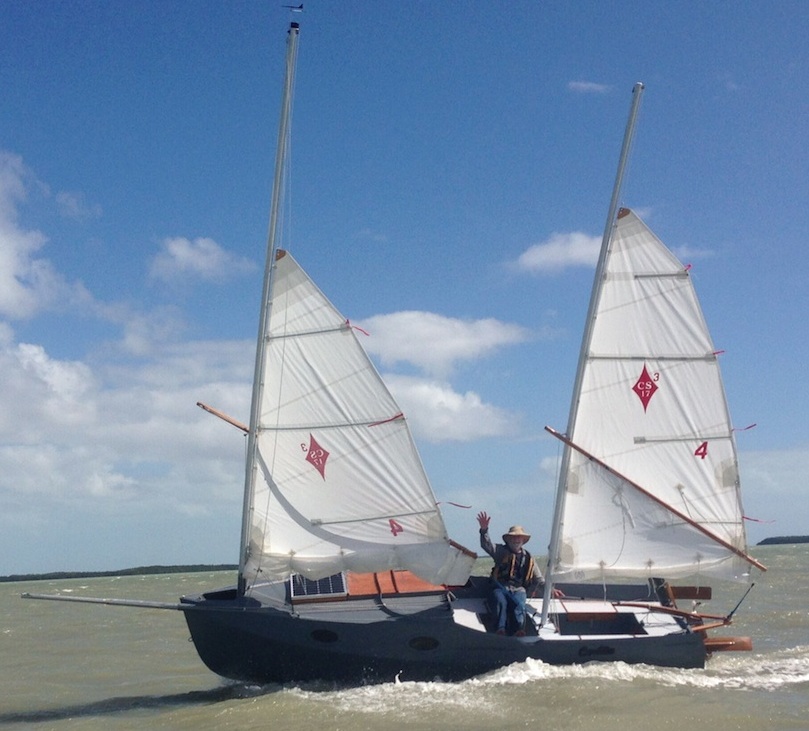 The watertribe is a group of like minded small boat enthusiasts started by by Steve Issac known as “the Chief”. These brave men and women participate in annual unsupported multi day challenges or “races” (depending on one’s goals). They meet every year in Florida among other places for the Everglades Challenge. The Everglades Challenge starts the first weekend in March.

The best way to get a handle on what this race is about is to watch the video “THE CHALLENGE” by Warren Richey. A veteran challenger, he labored to create this wonderful documentary about the race.

Below, a video from the 2019 Everglades Challenge starting line.

Helpful Links
Click here to see a full list of participants in the event. For a review of what the different boat classes mean, read this.  The short version is:
Class 1 = Kayaks/Canoes with 1 sqm sail.
Class 2 = Kayaks and Canoes with no sail allowed.
Class 3 = Sailing canoes with rigs that can stow inside the canoe.
Class 4 = Sailboats
Class 5 = Multihulls

How can I follow along?
The Watertribe website includes a “tracking map” where the entrants can be tracked. All participants are required to carry a SPOT satellite Tracking unit.
-Select the year for the event.
-Select “class 4” for small sailboats to see how the monohulls are doing.

There will also be discussion on the watertribe forum as well as the watertribe facebook page. These sources typically have very up to date information about the challengers, who has dropped out, who is sleeping, who has broke down, etc. You can also check on the messabout forum for a thread on the Event.