To see more about this design check out the Core Sound 20 Builders Guide. This document is continually updated and improved.

The Core Sound 20 was originally commissioned as a daysailer and camper sailer which could win races. Specifically, a boat which could beat the Core Sound 17 which had been gobbling up all the trophies. The boat has lived up her promise. Not long after she was officially launched in the summer of ’99, she won the grueling 2 day open water Independence Day Race. For more information: The Great Race. In spite of her energetic sailing characteristics, she is easily handled; even with our 2 1/2 year old grandson on the helm. The photo (above) was taken by the committee boat, which clocked her speed at 8 knots, with bursts to about 10 knots. Notice the rig: On this boat, all of the controls are led aft to the helmsman, allowing the boat to be reefed and un-reefed without leaving the helm. With increasing wind, we were able to lower the sails in order to lower the center of effort to reduce heeling. 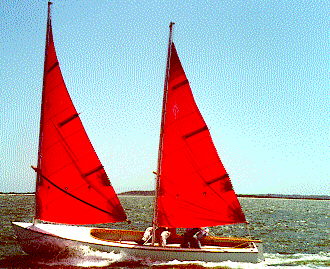 Photo above from "The Great Race" Beaufort, NC. Below, David at the helm of Core Sound 20 Hull #1.

Construction:
The sides are fiberglass/epoxy taped to the bottom panels just at the bow. Then the bottom panels are wired together along the keel centerline, and opened like a book, you have the sides in position and ready to wire. The hull panels are pre-engineered, so that there is no lofting, no jig or strong back required. Our “butterfly” construction technique allows easy hull assembly. 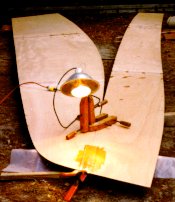 After the installation of the temporary bulkhead and transom, the sides are wired to the bottom. This boat is almost completely “stitched” and will shortly be ready for “gluing” ie. fiberglass/epoxy taping the seams. Note that the pre-attached stringer, which appears to be drooping at the bow above, align nicely when the hull is wired/folded into shape. This is the stringer which will carry the seating. Also clearly shown are the cutouts in the temporary bulkhead to take the keel batten and spaces for the chine taping to run through. The CS20 shown below, sailing in Australia, shows the mainsail furled (This sail has a hollow cut leech and no battens) and the mizzen is stepped in the third mast position, giving the boat perfect control during the squall. The sun is back out as the worst of the squall has passed and it can be seen by the wake that she is still making good speed. 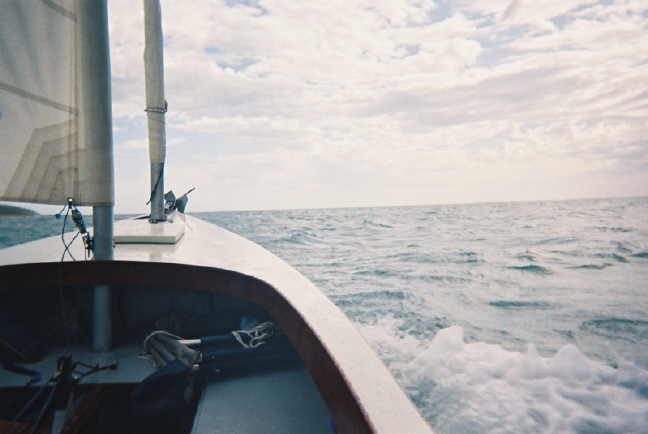 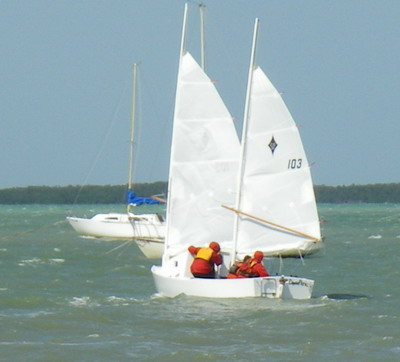 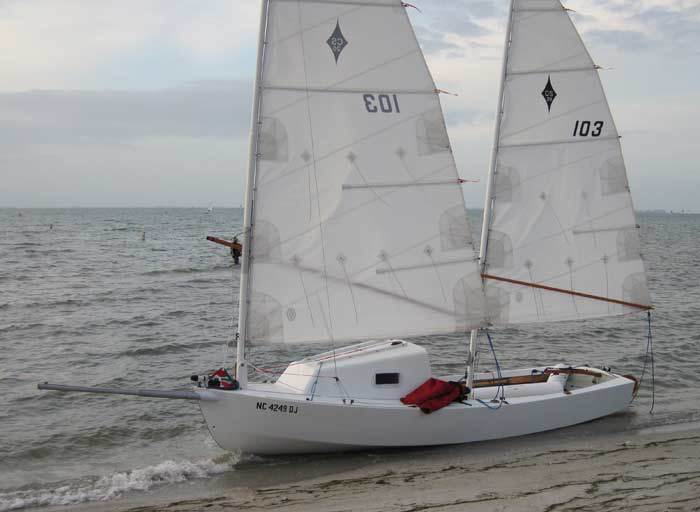 If you want to sail in weather like this you would be happy to be in a Core Sound 20. This boat was fitted with a cuddy cabin. Dawn Patrol was launched for the first time at the 2008 Everglades Challenge and came through unscathed finishing fourth. She has since won her class in the EC.
×