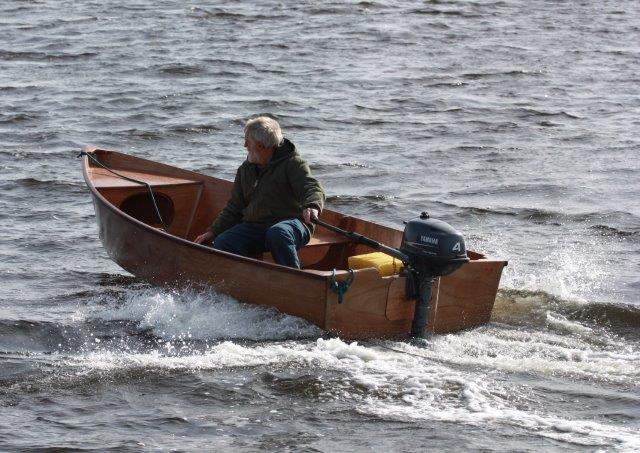 After receiving a lot of interest in our Amanda dinghy for use as small powered skiff we decided to create a full planing version to suit this need. The Amanda is a great all around skiff but alas, one boat can't do it all. The Jessy is a pure planing hull, she will run 20 mph with only a 9.9 hp motor. To do this we gave up sailing and rowing qualities and increased her beam to 5′. This gives her more stability and carrying capacity while making her more efficient on plane. The design includes sealed seat tanks and a hatch in the forward bulkhead for an anchor locker. Designed with simplicity in mind she is an ideal first build and great introduction to stitch and glue construction.

Note that Jessy 12 Hull #1 shown in the construction album above has a bench seat but the design now boasts larger sealed side seating for increased floatation.

Displacement at designed waterline (dwl), as drawn above) 720lbs.

The Jessy 12 has port and starboard enclosed seat tanks aft of a central bulkhead with an open forward section for casting or a small pedestal seat could be mounted to a reinforced box over the keel. A hatch in the forward bulkhead offers storage for an anchor. 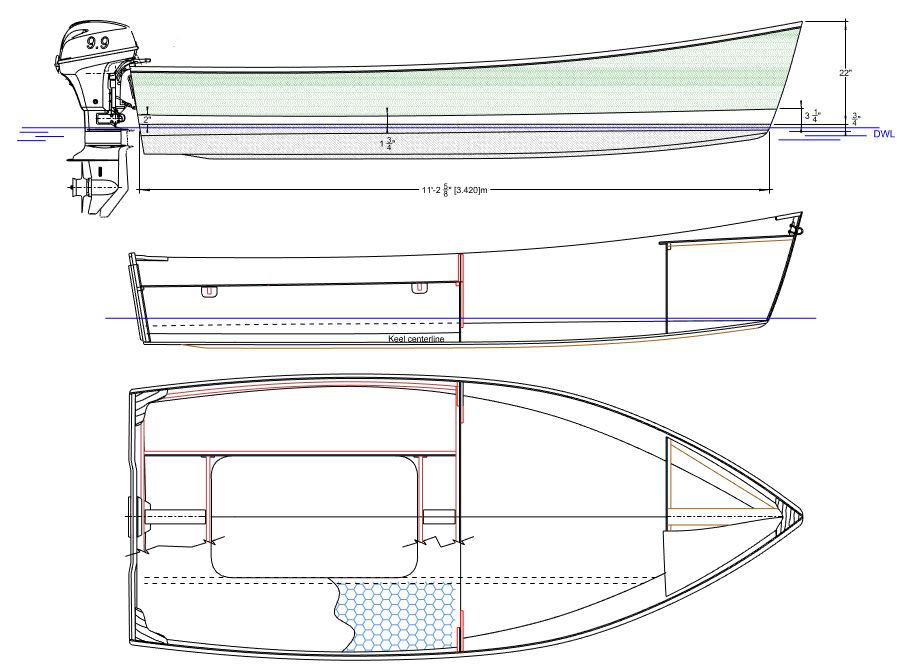 With a 4hp motor and one person aboard she topped out at 12 mph. With an 8hp that increases to around 22mph.

With two people aboard and an 85# dog, 4hp is not enough to get on plane but with 8hp she made 17mph. 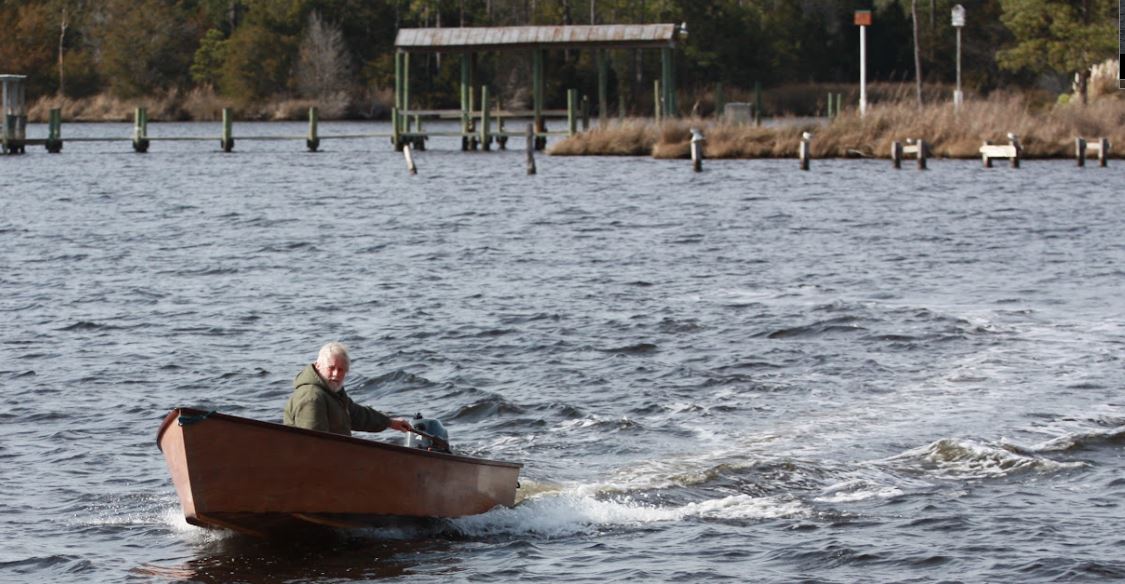 The Jess 12 kit parts are shown below. This is not a "complete kit" as it does not include the longer solid wood parts needed for the gunwales and side stringers or seat cleats. To reduce the cost of the kit and shipping, these are sourced by the builder and ripped on a table saw. The kit includes all of the plywood hull parts as well as some of the trickier solid wood parts such as the stiffeners for the transom and foredeck framing. These are CNC cut from clear southern yellow pine and planed to final thickness. 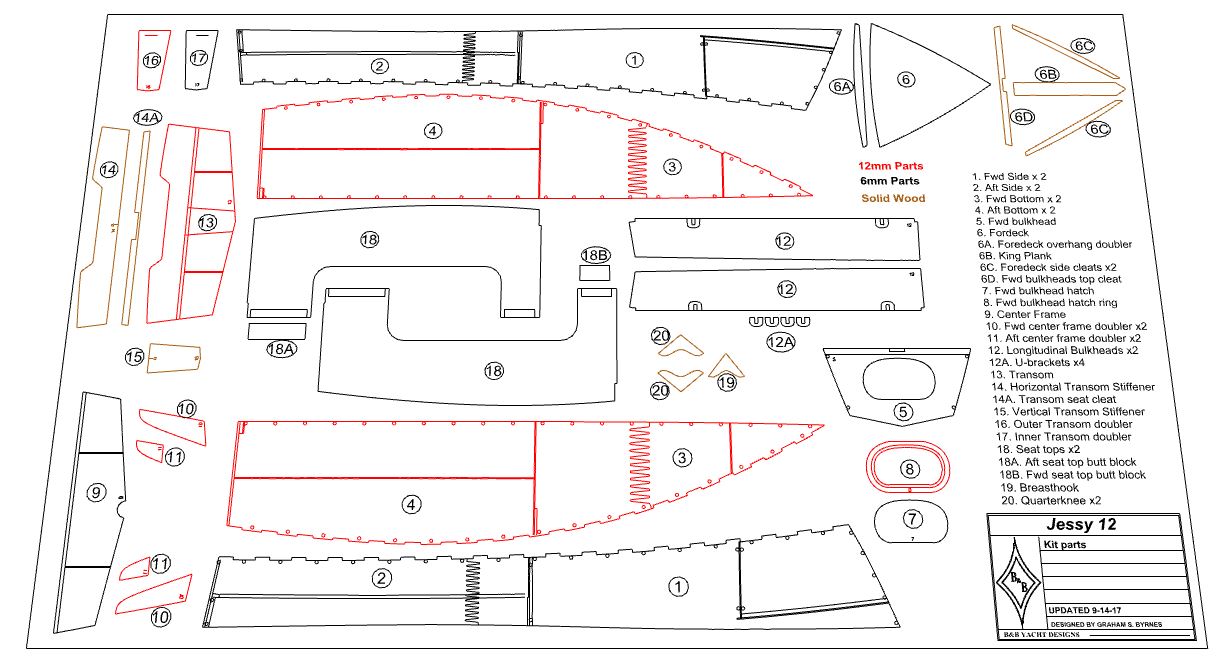 Below, Graham demonstrates the ease with which the hull is assembled at the Washington boat show. The sides are joined at the bow and connected to the sides of the transom. The forward bulkhead is added. Then the pre wired bottom panels are opened like a book and laid down onto the hull our unique "gear chine" assembly method locks the bottom panels to the sides and wire ties are used to "stitch" the panels together for tack welding and glass taping. 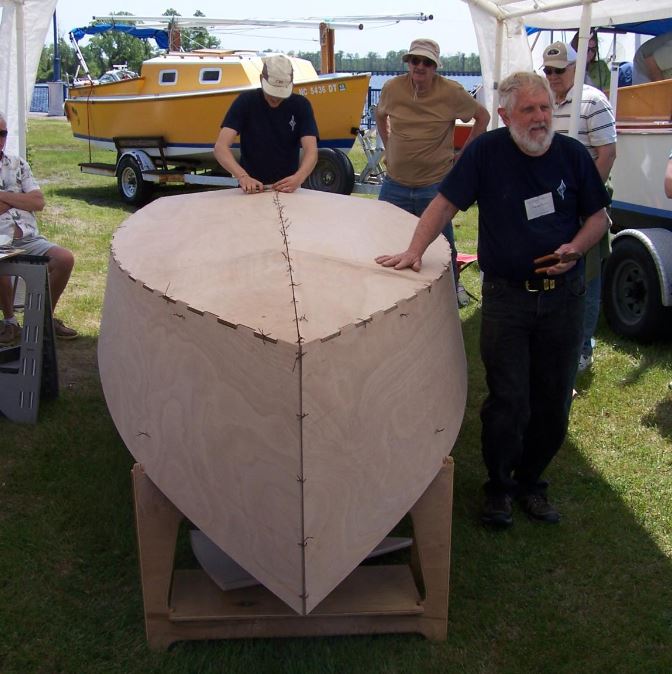 Below, a simplified sequence of the hull assembly shows the main steps of construction. A keel and two bottom strakes provide direction al stability.

A custom designed CNC cut building cradle is also available for the Jessy 12 (seen below). It will hold the boat rock steady and level both in an upright and bottom up position for excellent stability during construction. The cradles fold up for storage and include a lower tray to keep your tools off of the ground. The cradles are made from CNC cut 3/4″ birch plywood. Below, the assembled Jessy 12 in 3d sitting on her cradles. Cradle Detail. 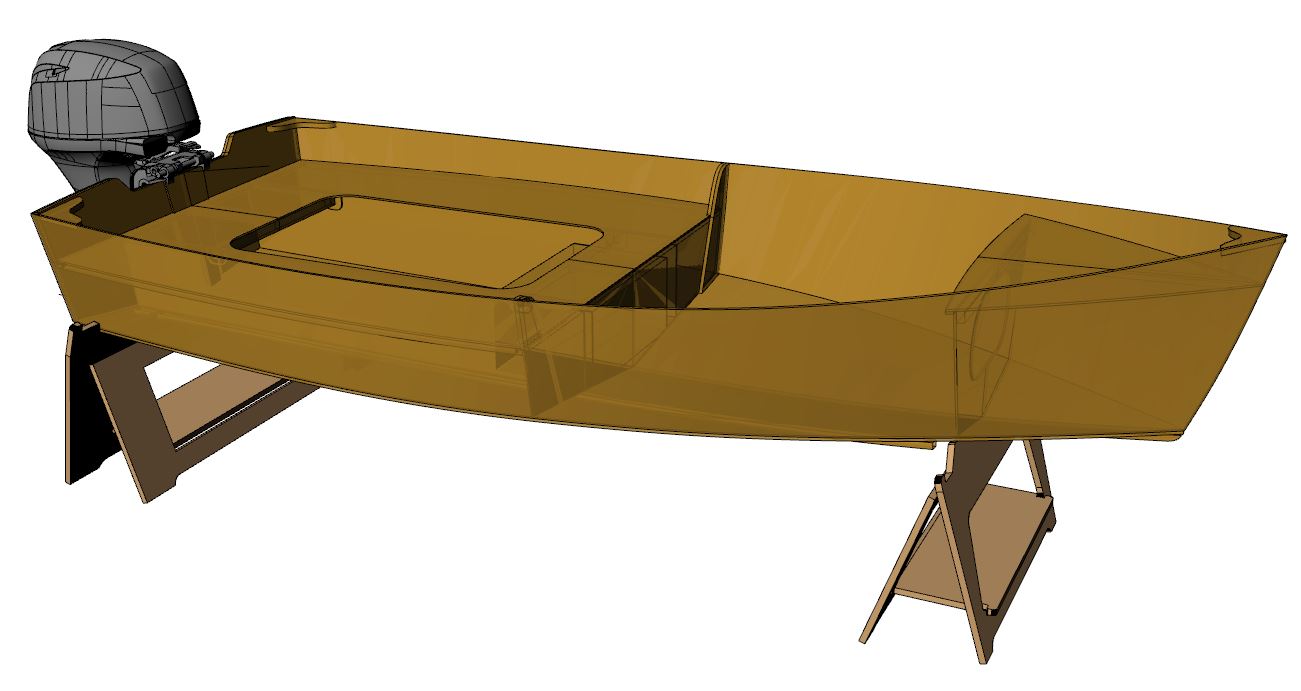 Below: A happy builder reports... "We had successful launch on July 4. Here are my son, son-law,5 grandkids, and I with the boat and 5 HP motor. It would fly with one person and plane with two." 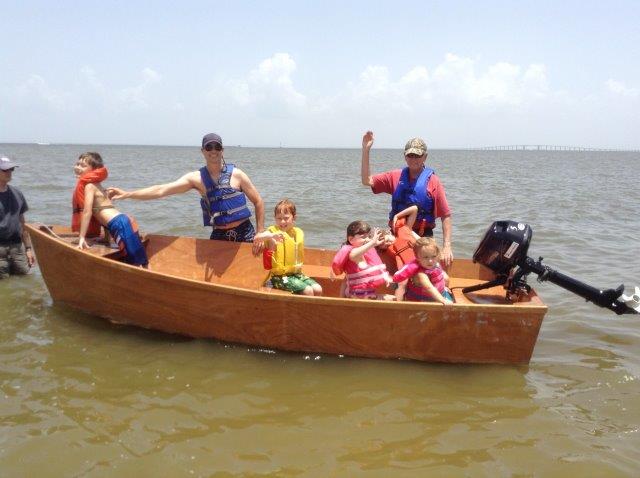